Welcome to No Man’s Land

Something happened to me in June.

After decades in development limbo, DC’s long-awaited comic book adaptation arrived exactly when I needed it most, after months of demoralizing political and social setbacks for feminism and female wellbeing in general.

Despite what James Cameron says, “Wonder Woman” is a feat of female representation the likes of which Hollywood never seemed capable of delivering before. The fact that it also became the biggest hit of the summer, breaking records left and right, was just icing on the cake. 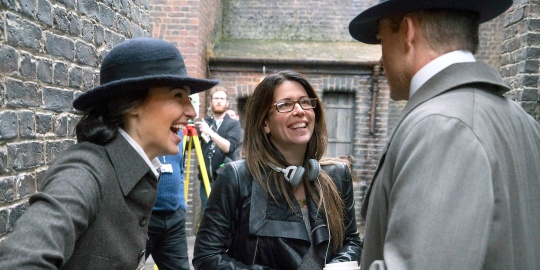 As star Gal Gadot charged into battle, bullets pinging off her silver gauntlets while soldiers cowered in the trenches, for perhaps the first time, little girls did not have to stretch their imaginations far to put themselves in her place. They were finally granted the same delight boys have long enjoyed, watching Indiana Jones, Luke Skywalker, Batman, or any other epic hero on a hero’s journey to save the world.

For grown women, the experience was even more profound.

Starved for female cinematic role models of power, strength, courage, compassion, intelligence, and heroism, the sight of Gadot’s Amazon warrior presiding over kick-ass action, not as a sidekick or sexual object, but as a three-dimensional hero who reflects back to us all that is best about our own humanity, was revelatory and unexpectedly cathartic.

There were tears. I assure you, they were tears of joy.

That said, it would be foolish to assume “Wonder Woman” changes everything.

For all we know, Hollywood will  jump on the female-led action movie bandwagon for a couple years before going back to business as usual. The worlds of science fiction, fantasy, videogames, comic books, cosplay, and TV and movie fandoms will likely remain minefields for women to navigate. Girls and women will still have to fight for their voices to be heard, in fictional worlds as well as the real world.

What has changed then?

Personally, I’m feeling more hopeful about the potential for women to step up and take their place at the forefront of geek culture, to blaze trails and envision ourselves in roles we thought we might never assume.

This hope has inspired a new project, a blog dedicated to the voices of women who are passionate about fandoms of all kinds. It’s no coincidence I’m launching this endeavor the day before “Wonder Woman” is released in digital HD.

My intention is that No Man’s Land would be an outlet for the resources and skills I’ve honed during a more than 15-year career as an entertainment editor, film critic, blogger, and freelance writer.

Most of all, though, I want to have fun, and I want you to have fun too. This will most often take the form of shameless and enthusiastic discussion of all our favorite geeky things.

So we’ll be talking about Game of Thrones, and Doctor Who, and Harry Potter, and Stranger Things, and comic books, and anime, and comic book movies, and conventions, and television shows, and books, and collectibles, and cosplay, and whatever other nerdy thing we happen to be obsessed with at the moment.

No Man’s Land will also endeavor to highlight the stories of women who are passionate about various fandoms and express this in fascinating ways, in pioneering careers, creative pursuits, unusual hobbies, family activities, and many other avenues.

We won’t shy away from talking about feminism, politics, social issues and perhaps even subjects that are painful, complex, or controversial.

Guys, despite the blog title, this is a space where you are welcome. We’d love your thoughts and contributions because we know so many of you are on our side.

Readers, I’d love it if you would function as my lasso of truth by offering your comments, feedback, suggestions, content ideas, pitches for guest posts, or whatever is on your mind.

Let’s get out of the trenches. I’ll see you on the battlefield.

4 thoughts on “Welcome to No Man’s Land”