Seattle’s GeekGirlCon is genius. Let’s bring it to SoCal!

If you happen to be in Seattle this weekend, you could attend the utterly awesome-sounding GeekGirlCon, scheduled Saturday and Sunday at The Conference Center downtown.

Launched in 2011, the two-day convention was inspired by a panel called “Geek Girls Exist” at the 2010 San Diego Comic Con. The social media momentum from that event spawned the all-volunteer organization that produces GeekGirlCon with the goal of “empowering women and girls to pursue their passions.”

Though the convention focuses on the contributions of women in fandoms and geekdom, it places a heavy emphasis on inclusivity, shunning notions of so-called “geek cred” and championing worthy ideals of community and diversity, according to the organization’s mission statement.

This year’s event will feature all the good stuff you’d expect from any decent con, including panels and workshops, an exhibitor hall, a gaming floor, photo ops and signings, cosplay, and a fashion show, not to mention a DIY Science Zone.

As if I couldn’t love the concept of this event more, the organizers aren’t afraid to get political.

One of the featured panels is “What Rebellions are Built On: Popular Culture, Radical Hope, and the Politically Engaged Geek.” It will apparently discuss how “themes of hope and resistance in nerd enthusiasms such as Star Wars and Harry Potter serve not just as moral guides, but as the basis for effective plans of action.”

Among the other totally woke panels offered: “’The Handmaid’s Tale,’ ‘B*tch Planet’ and the Politics of Women’s Bodies” and “The Leslie Knope Guide to Political Activism.” Would someone just book me a flight to Seattle already?

Seriously, though, this brings me to the question: Why aren’t there more events like this across the country? And why can’t we have nice things like this in Southern California, of all places?

Sure, we have the mother of all cons, San Diego Comic-Con, and we have Wonder-Con, and Stan Lee’s Los Angeles Comic Con, and Long Beach Comic Con, and Anime Expo, and a host of other events that all add up to geek heaven.

While attendance at these once dude-oriented events is now equally, or just about equally, balanced between men and women, events like San Diego Comic-Con still have their issues when it comes to gender equality.

Try attending a convention solo as a woman without getting hit on by some guy pretending he just wants to chat you up about Neil Gaiman, for instance.

If you’ve been to any of the major cons, you’ve witnessed the thoroughly disgusting phenomenon of pervy amateur photographers stalking female cosplayers in a way that makes just about everyone uncomfortable.

Or you’ve endured that awkward moment during the panel Q&A session where Scarlett Johansson or Kate Beckinsale has to graciously fend off a marriage proposal from some slobbering 17-year-old gamer who should know better. (It’s only cute when you’re, like, 5, guys.) 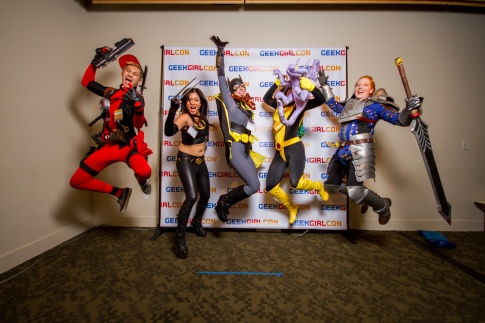 So how is it no one has thought to create a convention specifically targeted to women, with women’s issues and interests squarely in focus and an overarching goal of promoting women in gaming, comic books, science, tech, and other typically male-dominated fields?

After all, we are the entertainment capital of America. Imagine the artists, actors, writers, filmmakers, activists, cosplayers, gamers, and public figures we could book. Think of the creative, financial, and promotional resources at our disposal. Fantasize, for a moment, about the exciting dialogues we could spark about representation, inclusion, gender politics and equality.

In the interest of full disclosure, GeekGirlCon isn’t without a dark side. The con courted controversy earlier this summer when several of its original founding members resigned, but not before commandeering the organization’s email list and sending out distressingly vague allegations of bullying, racism, sexism, and discrimination.

The details surrounding the charges leveled by the ex-staffers remain frustratingly murky, but the convention is slated to proceed as scheduled this weekend.

I’m going to go out on a limb and say that whatever wrinkles GeekGirlCon still has to iron out  — however serious — the event is still a genius idea. Here’s hoping some intrepid entrepreneurs can learn from the Seattle event’s mistakes and launch something even bigger, better, and more inspired for women in SoCal.

If, like me, you’re intrigued and want to support GeekGirlCon from afar — or just enjoy a bit of vicarious merch or earn some geek cred by pretending you were there — you can nab this GGC17 fund-raiser T-shirt, designed by California artist Celia Sutton.

One thought on “Seattle’s GeekGirlCon is genius. Let’s bring it to SoCal!”