In memory of Carrie, the princess who became a general

On Dec. 18, 2015, Carrie Fisher made a glorious comeback in “Star Wars: The Force Awakens,” reprising her role as the ultimate self-rescuing princess, Leia Organa.

A year and nine days later, she left this Earth after what the newspapers called a “cardiac event” or “incident” on a flight from London to Los Angeles.

Her mother, Hollywood icon Debbie Reynolds, followed her a day later, as if she could not bear the separation.

I was just as saddened as anybody by the abrupt loss of Fisher. A friend reminded me that, a few months earlier, she had suggested we attend a signing in L.A. for the writer’s new book, “The Princess Diarist.” I had shrugged off this idea, but now regretted it.

I guess I assumed I would have other opportunities to meet her. I was preoccupied with other things. I now stand corrected. Always take the chance to meet your heroes when you can. This is my new mantra. When it comes to amazing people who can never be replaced, carpe diem.

I think we’d all agree that last year, especially the end parts and on into early 2017, were pretty rough, politically, socially, globally. Maybe that’s why I mostly put Carrie out of my thoughts and moved on.

Lately, though, I’ve found myself thinking about her a lot.

This is probably because Ms. Fisher is about to make her final appearance in the Star Wars franchise as “The Last Jedi” officially debuts Friday. Trailers feature images of her, stoic and regally clad in diplomatic robes. The cast and makers of the film paid loving homage to their absent co-star this weekend at the film’s premiere.

I’m sure I’m not the only who has suddenly found myself revisiting the memory of Carrie, and the cinnamon-bun-haired princess she so famously brought to life.

Leia Organa’s first appearance in “A New Hope” is the stuff of fairy tale tropes. She’s the enigmatic damsel in distress, peering furtively from behind her hooded cloak, the beautiful princess who triggers the hero’s quest and all the ensuing action of George Lucas’ original space opera.

We first see Leia literally as a hologram, an ephemeral figment of fantasy. “Help me, Obi-Wan Kenobi, you’re my only hope.” 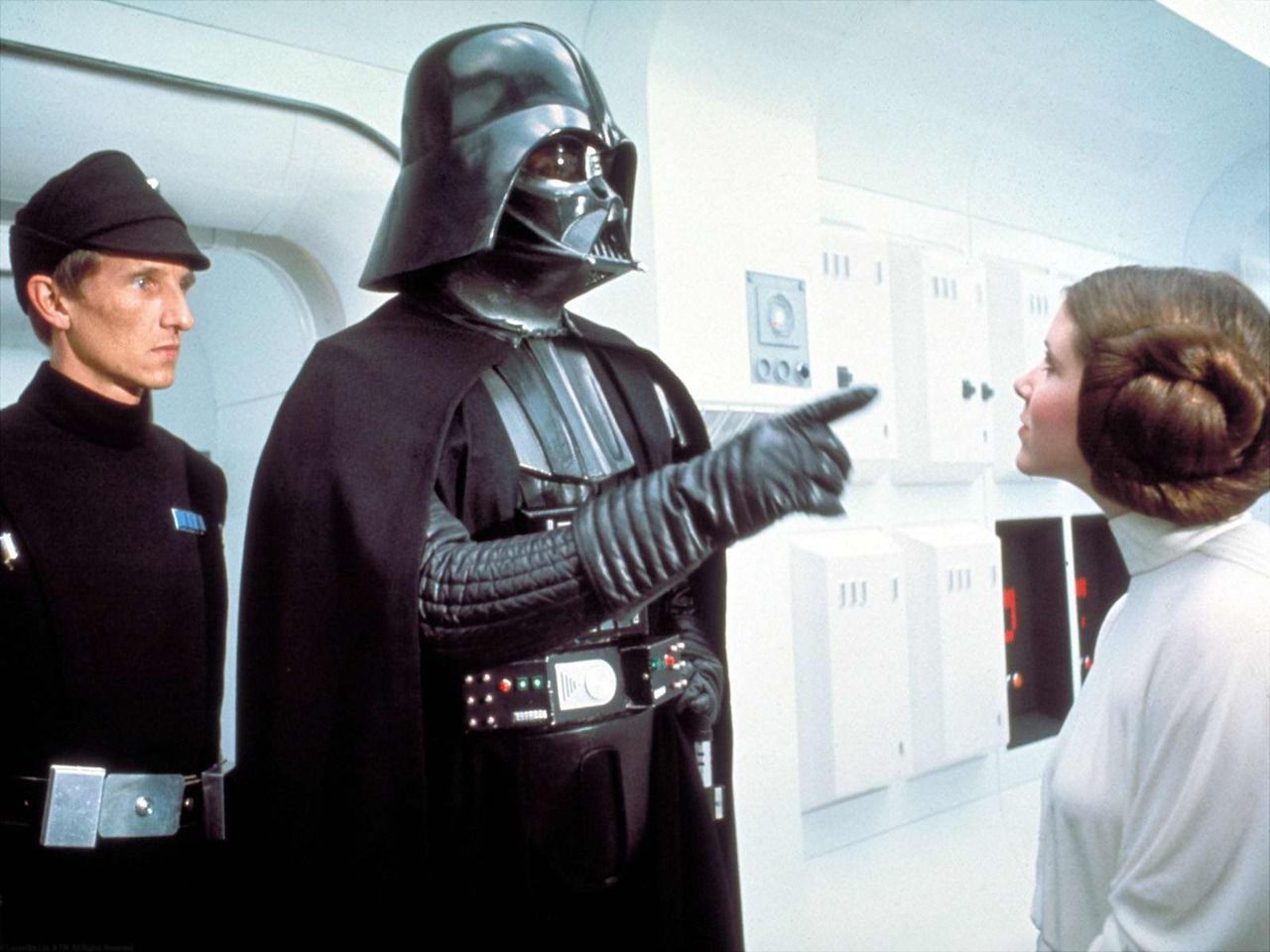 But when we finally meet the real Leia — in the scenes that most riveted me, a girl of 12, when I saw “A New Hope” — she is so much more than a tired, old stereotype.

Lifting her chin up to look Darth Vader square in the eye … er, mask.

Spitting rebukes at the Dark Lord himself.

Leia is terrified, but she bravely endures torture and, most devastatingly, the sight of her home planet and everyone she loves blasted into oblivion by the Death Star.

When Luke Skywalker and Han Solo finally show up to save her, she is deliciously unimpressed by them. Her sarcasm is unparalleled.

“Aren’t you a little short for a Stormtrooper?”

Sure, Lucas can’t resist romanticized nonsense, like that kiss on the cheek before Luke swings her across that chasm, but Leia spends a good deal of her time rolling her eyes at the ineptitude of her so-called saviors. She never hesitates to pick up a blaster and charge into the fray herself. She knows it’s up to her.

Fisher imbues Leia with qualities that might be stereotypically classified as “difficult.” She is a leader. She’s the boss. She’s convinced she is smarter and more capable than Luke and Han. She has no patience for male bravado or recklessness. She clearly doesn’t care that anyone might be intimidated by her competence and strength. 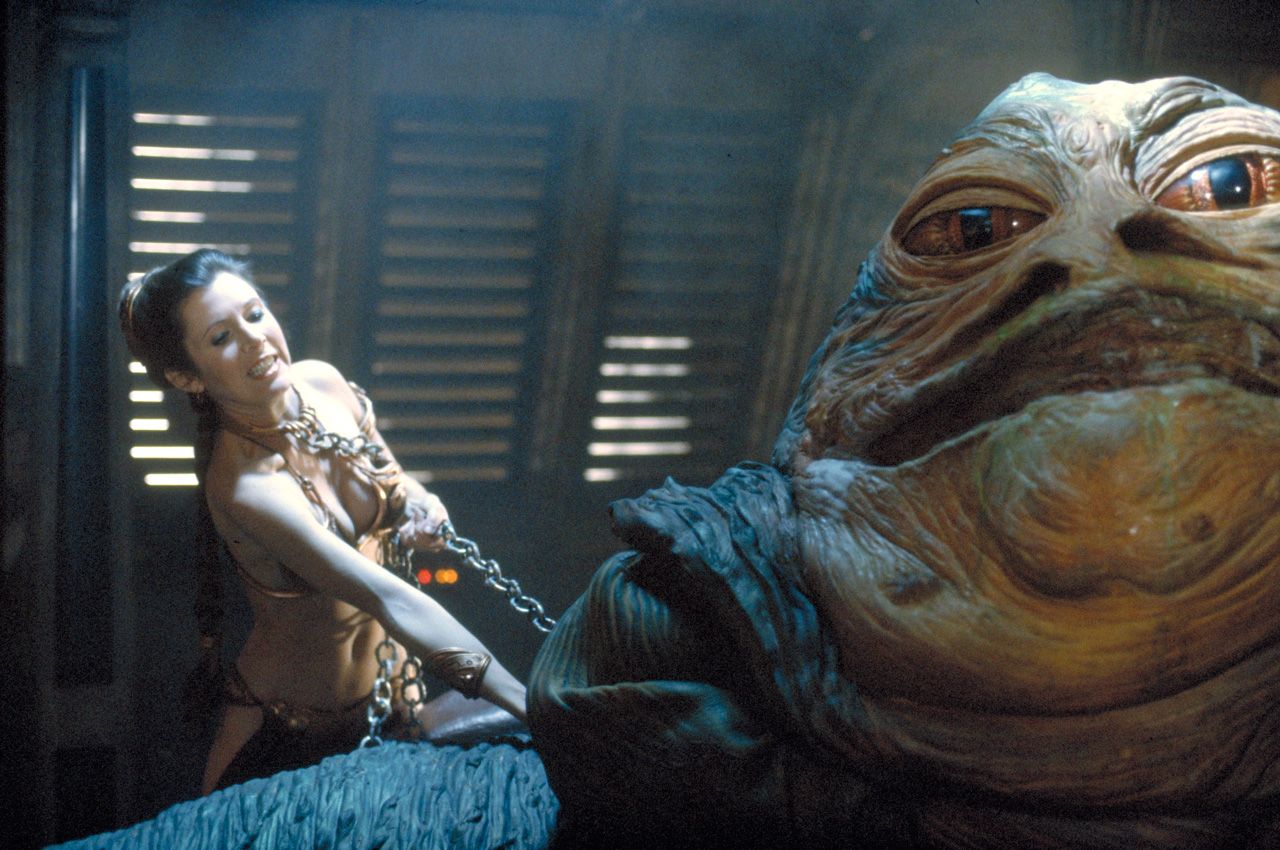 Later in the trilogy, we learn more about Leia. She’s a rescuer, masterminding the carbonite-frozen Han’s escape in the guise of a bounty hunter, and a total frickin’ bad-ass — strangling Jabba the Hutt with her bare hands while clad in that demeaning gold bikini is one giant F-U to the creep who tried to enslave her.

We also witness Leia’s vulnerability in her interactions with Luke. The scene in the Ewok village, in which she shares her memories of her mother, only gets more poignant as the franchise progresses. The fact that she is the one who remembers Padme is fraught with significance.

Let’s face it. It was always inevitable Leia’s romance with Han wouldn’t last. She was far too grounded, too honest, too sensible to put up with a restless rascal like Solo, however good he might look in those striped pants.

When I was younger, one of my biggest frustrations concerning Leia was that she was never allowed to pursue the path of the Jedi like her brother.

Yoda and Luke speak of her power – “My sister has it” — and we catch glimpses of her gifts in her psychic connection to Luke.

For a long time, I was enamored by an imagined alternate reality in which Leia would train, face trials, and embrace her Force power, wield a lightsaber and fight the Dark Side alongside her brother.

It’s only recently that I’ve begun to see the Leia of “The Force Awakens” and “The Last Jedi” as someone who has actually embraced her perfect destiny, sacrificing the sacred path of the Jedi to lead the Resistance against the reemergence of the Dark Side in the form of the First Order.

Leia chooses the path where she is most needed and steps into the role she was born to fill, becoming General Organa. She never wields the lightsaber, but plays a more vital role in the battle for Light.

She is also the one who doesn’t turn tail and run after the devastation of Ben Solo’s transformation into Kylo Ren. While Han and Luke are too weak to face their failures as, respectively, father and Jedi master, Leia holds the line as leader of the Resistance. She is the only one who holds out hope for her son’s redemption.

“You think I want to forget him? I want him back,” she tells a wavering Han, imploring him to bring Ben home.

Leia is the true hero of the Star Wars saga because she is courageous enough to sacrifice personal ambition and overcome her fears to serve the greater good of the galaxy.

Much like Leia, Fisher was sometimes labeled as “difficult.” The progeny of Hollywood royalty, she survived a turbulent childhood, but struggled with addiction and mental illness her entire life.

She chaffed at and called out the hypocrisy of an industry that didn’t quite know what to do with her. She was a brilliant, scathing, eccentric author of books and screenplays and was refreshingly frank and irreverent when it came to her flaws and personal failings.

Most of all, she was always, unapologetically herself.

“She was purposefully open in all of her work about the social stigmas surrounding (addiction and mental illness),” Fisher’s daughter, Billie Lourd said, shortly after her mother’s passing.

“I know my Mom, she’d want her death to encourage people to be open about their struggles.”

Thanks to “The Last Jedi,” we’ll enjoy Carrie’s talent a little while longer and be inspired by her once more.

She deserves this final moment in the spotlight.

3 thoughts on “In memory of Carrie, the princess who became a general”