EDITOR’S NOTE: Welcome to the first installment of “Geek Home Decor,” a new series on No Man’s Land showcasing the geek-themed homes or rooms we’re currently drooling over. Maybe you’ll discover some decor tips or be inspired to put together your own “nerd cave.” If you have a room or house you’d like to show us, send a description and or pics to lavendervroman@gmail.com.

Washington-area Star Wars fan couple Stephanie and Jacob Patterson have stopped fighting it — as so many of us nerds are still clumsily attempting to do — and let their obsession with George Lucas’ galaxy far, far away take over the entirety of their apartment. The result is a Star Wars fanatic’s dream come true — a cozy retreat with a retro twist that’s one with the Force.

Jacob explains how Star Wars came to dominate their place:

“Pro tip: When decorating for a themed room, a new ink cartridge and a bunch of card stock are your best friends. I found a bunch of images I liked online and used GIMP 2, a free art program, to make them all the size I wanted. Then I just print them, cut them out, punch a couple holes out of each of them with a hole puncher, and string some ribbon through the holes.

I also used a sword display plaque, previously used to display Sting from Lord of the Rings, to display my Darth Vader lightsaber.”

Here are images from some of the banners created by Jacob: 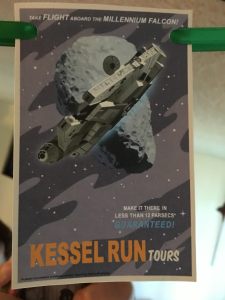 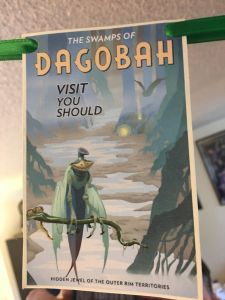 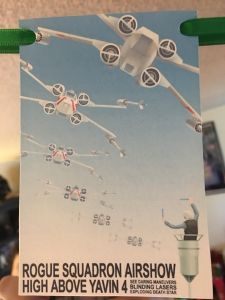 According to Jacob, every room of the apartment he and Stephanie share contains Star Wars items.

“Our kitchen has an R2-D2 measuring cup set, an R2 popcorn bucket, some vintage looking art (Dark Side Blend Coffee and Rebel Cola), and some lightsaber flatware. Our bathroom has a Star Wars shower curtain. Our bedroom has a bunch of Star Wars Pop figures as well as some Star Wars novels and comic books. And our living room is full of the majority of our Star Wars collection.”

Jacob describes some of his prize Star Wars items:

“I really love the helmets I have (the Black Series Poe Dameron X-wing pilot helmet and the new Black Series Darth Vader helmet). The Poe helmet has battle sounds, and if you talk into the microphone, BB-8 will talk back. The Vader helmet is super detailed on the inside and fits together magnetically in three parts. It also changes from the classic Vader breathing sound to the asthma-like wheezing when you take off the top part of the helmet just like at the end of “Return of the Jedi.”

I also love my original, old beat-up Star Wars novelization from 1976 and my vintage action figures I picked up from a great vintage toy shop in Tacoma. Stephanie’s favorites are her Boushh Leia Pop and vintage Lando action figure.” 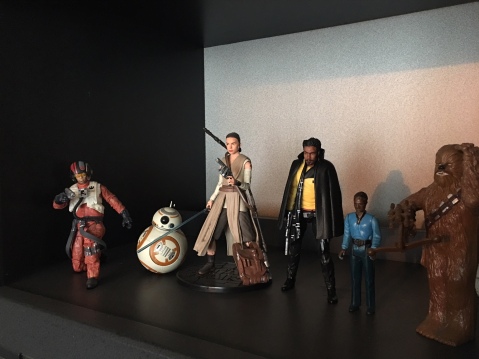 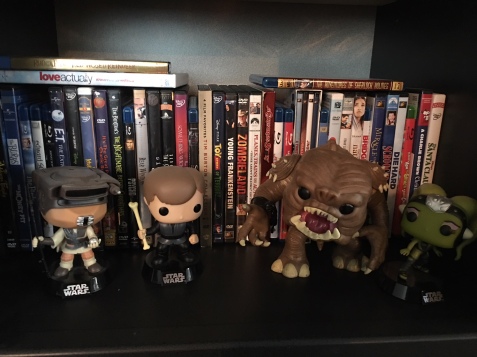 Although Jacob is a lifelong Star Wars fan, most of the Pattersons’ collection is relatively new.

“I have had Star Wars items (mostly toys) since I was three years old and I got the Ewok village for my birthday,” Jacob said.

“The majority of those toys, however, were sold at a yard sale a few years later. I didn’t have much Star Wars stuff in the dark years of the late eighties and early nineties. I still have the movie posters from the re-release of the trilogy in 1997, but the majority of our collection is stuff we got within the last few years starting on Force Friday 2015.”

Among the items Jacob and Stephanie would still like to add to their decor scheme:

“If I had the ridiculous amounts of money to afford it, I would love to get the Regal Robot Millennium Falcon Asteroid Coffee Table and their Han Solo Carbonite Desk,” Jacob said.

“As far as things we could actually afford, ThinkGeek has a hallway carpet runner of the New Hope opening crawl that we really like.”

Is there any downside to having a Star Wars themed apartment?

“Guests might look at you like you’re a ridiculous man-child, but that doesn’t really bother me, because I am,” Jacob said.

I asked the Pattersons which fandom they’d choose if they were to do another themed room/house.

“Definitely Harry Potter,” Jacob said. “We have a small collection, but it would be fun to have the room to make it bigger.”

Enjoy some more photos of the Pattersons’ Star Wars apartment: 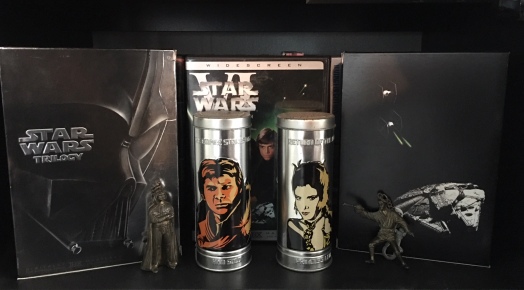 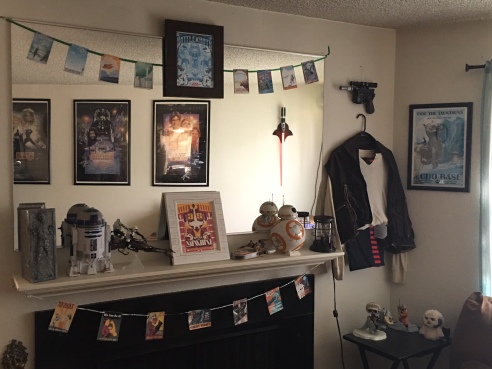 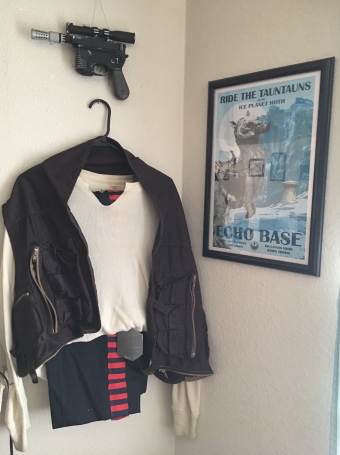