If you’re a fan of Southern California sci-fi greats, like Ray Bradbury, Edgar Rice Burroughs, Octavia Butler, and Syd Mead, you won’t want to miss an unassuming but fascinating exhibit that’s about to wrap up its run in Pasadena.

“Dreaming the Universe: The Intersection of Science, Fiction, & Southern California” is on display at the Pasadena Museum of History through Sept. 2. If you’re a classic sci-fi enthusiast who lives in (or is visiting) SoCal, the exhibit makes for a great start to a day out in Pasadena.

“Dreaming the Universe” examines the legacy of sci-fi in SoCal during the 1930s to ’80s and how it “interacted with the advances of science, changes in technology, and shifts in American society,” according to the museum’s website. Curated by Nick Smith, former president of the Los Angeles Science Fantasy Society, the exhibit includes artifacts, art, books, historic photos, and other memorabilia.

If you’re expecting a flashy, high-tech experience, you may want to lower your expectations. “Dreaming the Universe” is small — you can probably get through it in about 20 minutes — but it’s also surprisingly substantial and will interest anyone who’s into vintage or obscure sci-fi movies, TV, toys, books, art, and oddities.

Filmmaker Peter Jackson discusses the science-fiction masters who influenced him in the “Dreaming the Universe” exhibit at the Pasadena Museum of History.

“Dreaming the Universe” begins with an examination of the Rocket Age of 1936, the first rocket tests conducted in Pasadena’s Arroyo Seco, and the growth of the SoCal aeronautics industry, which “paralleled the growth of the creative science fiction community,” according to the museum’s website.

I particularly appreciated that the display focuses on the contributions of sci-fi fans, including the legendary Forrest J. Ackerman, and the roles they played in the development of the science-fiction genre.

This hand-painted door is from the 1980s clubhouse of the Los Angeles Science Fantasy Society, a room where fanzines were created in an era where new fans were flocking to Star Wars and Star Trek.

As I mentioned, “Dreaming the Universe” is scarce on flashy properties or objects loaned by major movie studios, so you’re not going to be seeing a lot of Marvel or DC superheroes or anything of that ilk. Still, you’ll find a few extremely modest collections devoted to Star Wars, Star Trek, and famous comic book characters.

The Star Trek section includes uniforms worn by Scotty and Lieutenant Paloma from the original series:

There’s also a replica communicator, tricorder, and phaser, purchased from a Star Trek convention in 1986: 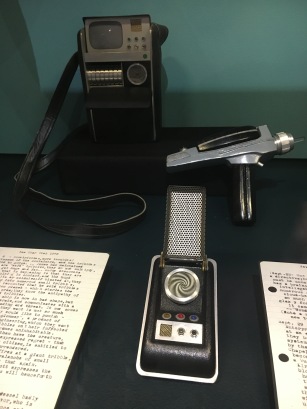 What “Dreaming the Universe” lacks in big-ticket items, it more than makes up for in the form of the rare, the obscure, and the eccentric, like these Skeletor pieces from the 1987 movie “Masters of the Universe.” 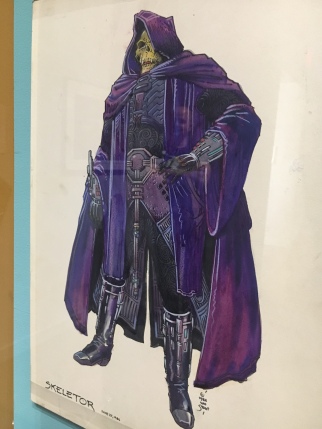 As a devoted fan of “Fahrenheit 451” author and Los Angeles resident Ray Bradbury, there were many artifacts in “Dreaming the Universe” of personal interest to me, including this sculpture:

The piece, inspired by artist Christopher Slatoff’s friendship with Bradbury, is modeled upon the short story “Pieta Summer,” but also sports the tattoos of the author’s famed “Illustrated Man” on the back of the sculpture. 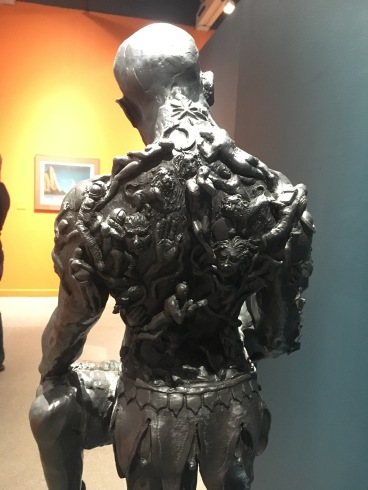 Seeing this pair of glasses (I think they must be from the late Bradbury’s childhood because they are very small) nearly brought me to tears:

Another emotional moment came when I spied this blanket, which Bradbury used to bundle up in when he traveled by wheelchair later in life and which I recognized from several appearances where I was fortunate to meet the writer. Bradbury was a huge Halloween geek! 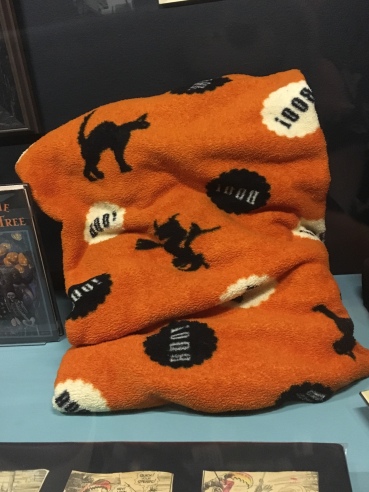 I also loved seeing this inscription by Bradbury in a volume of “The Martian Chronicles,” referring to L.A.’s Clifton’s Cafeteria, where the author often dined as a broke teenager in the 1930s.

And here is a DVD case of the 2006 film “The Sci-Fi Boys,” signed by stop-motion pioneer Ray Harryhausen, Ray Bradbury, and Forrest J. Ackerman:

Below are some more highlights from the “Dreaming the Universe” exhibit. 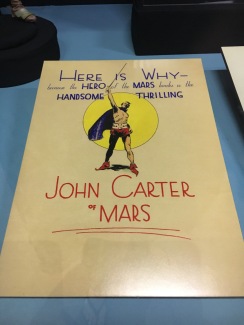 A bust of actor Glenn Strange as Frankenstein (Strange played the monster in three Frankenstein movies after Boris Karloff tired of the role.): 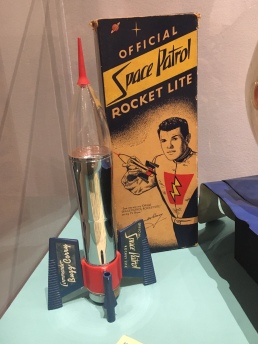 Artifacts from the career of visual effects artist and stop-motion innovator Ray Harryhausen:

A costume drawing of the robot Gort from 1951’s “The Day the Earth Stood Still”: 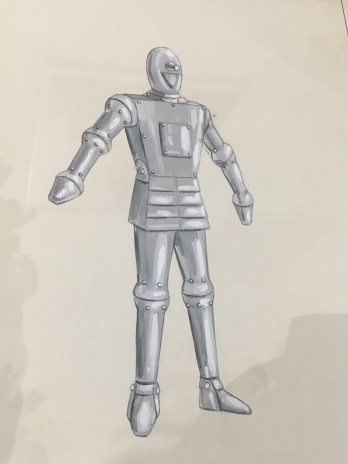 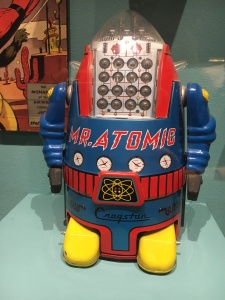 A caricature of J.R.R. Tolkien, circa 1970, by “Dean of Science Fiction Artists” Frank Kelly Freas.

This autograph board was signed by 63 people associated with the television program “The Twilight Zone.” Fan Jeff Rack tracked them down over a period of 20 years.

An ape head, boots, molded shoulder pieces, and a Super 8 film reel case from 1968’s “Planet of the Apes”: 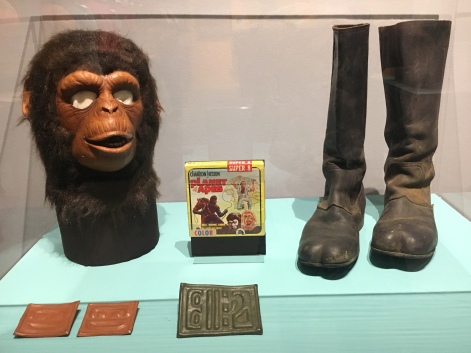 Concept art by concept Syd Mead, who influenced the iconic looks of such films as “Blade Runner,” “Tron,” and “Aliens”:

“Dreaming the Universe” is on display from noon to 5 p.m. Wednesday through Sunday, through Sept. 2, at the Pasadena Museum of History, 470 West Walnut St. Tickets cost $9. For more details, visit the museum website.