The Badass Ladies of Summer return with a vengeance

I began my annual roundup of the Badass Ladies of Summer in 2014 when I noticed a growing and encouraging trend of women delivering strong, wildly entertaining, box-office stealing performances in Hollywood’s most action-heavy, male-dominated season.

Since then, there have been many high points, like Charlize Theron’s performance in “Mad Max: Fury Road,” the female-led cast of Ghostbusters, and Margot Robbie, tearing it up as Harley Quinn in “Suicide Squad.”

The pinnacle of summer badassery was reached last year when Gal Gadot debuted on the big screen as Wonder Woman and basically gave female moviegoers of all ages the representation they’d been craving all their lives. Aside from that game-changing performance, however, the rest of summer 2017 skewed disappointingly toward the testosterone-fueled end of the scale.

So I’m happy to report that the badass ladies were back with a vengeance in summer 2018. From fierce, formidable comic book heroines (and villains) and razor-sharp double agents, to sci-fi goddesses and tough-as-nails mamas, women were kicking butt, taking names, and giving their male co-stars a run for their money. (And several of them, including Emily Blunt, Zoe Saldana, and Rebecca Ferguson, are Badass Ladies of Summer alumni!)

Below, we salute these women and their amazing achievements in cinematic badassness.

Emily Blunt in A Quiet Place: I’m going to roll the summer parameters back a bit to April, when the virtually silent, crazy-suspenseful thriller directed by Blunt’s real-life hubby, John Krasinski, had audiences on the edge of their seats. As good as the rest of the cast is, Blunt’s performance – a combination of grief-stricken vulnerability, maternal grace, and survivor instinct — is the definite highlight.

She plays Evelyn, a mother of three with another on the way whose mission is to keep her children alive in a post-alien invasion America where emitting one small sound could be deadly. No other summer heroine gave birth alone in a bathtub while hiding from extraterrestrial predators, so she might be the baddest of them all.

So did Klementieff’s Mantis, who was mainly there to provide comic relief in Guardians of the Galaxy Vol. 2, but revealed herself in this film to be a quick-thinking, nimble fighter.

When Thanos’ Black Order brings the fight to Wakanda, Gurira’s Okoye fiercely leads the defense alongside T’Challa. She also participates in one of the movie’s most epic fight scenes, flanked by Scarlet Witch and Johansson’s Black Widow, against Thanos minion Proxima Midnight.

As for Wright’s Shuri, Infinity War definitely could have used more of the tech-genius princess’ irreverent wit. I also suspect we’ll be seeing more from Gillan’s tormented Nebula in the next chapter of the Avengers.

Thandie Newton, Erin Kellyman, Phoebe Waller-Bridge, and Emilia Clarke in Solo: A Star Wars Story: As mixed as the reaction was to the most recent Star Wars spin-off, it brought us a quartet of intriguing new leading ladies. The only shame is most of them exited the film much too early, leaving us hungry for more.

Newton’s Val, the loyal, no-nonsense right-hand woman to Woody Harrelson’s thieving Tobias Beckett, is so tough and likable, she should have been allowed to stick around for the entire movie.

Waller-Bridge gave voice to the franchise’s first major female droid character, who happens to be the wokest rebel in the galaxy, but L3-37’s ultimate demise deprives her of her agency in disturbing ways.

Kellyman’s Enfys Nest stays hidden behind a mask for most of the movie. The removal of said mask is one of the most electrifying moments in Solo, but it’s a short-lived one, and it sure as hell better be a prelude to more of this galactic pirate goddess.

As for Clarke’s Q’ira, she’s a scrappy, resourceful survivor who’s light years ahead of Han Solo when it comes to maturity and realistic expectations. She’s a controversial figure and remains enigmatic for most of the film. Though the script gives her character short shrift, Clarke’s portrayal is charismatic and strong.

Zazie Beetz in Deadpool 2: Don’t get me started on what a fiasco Deadpool’s hooker with a heart of gold girlfriend Vanessa continues to be in this sequel. Thank goodness we have Beetz’s cool, perpetually self-possessed Domino to save us from the boys club. With her luck powers unfolding in slow-motion, she’s often the best element in many of the fight scenes in this second outing. And that attitude! Let’s roll the dice and hope a spin-off is in the works. 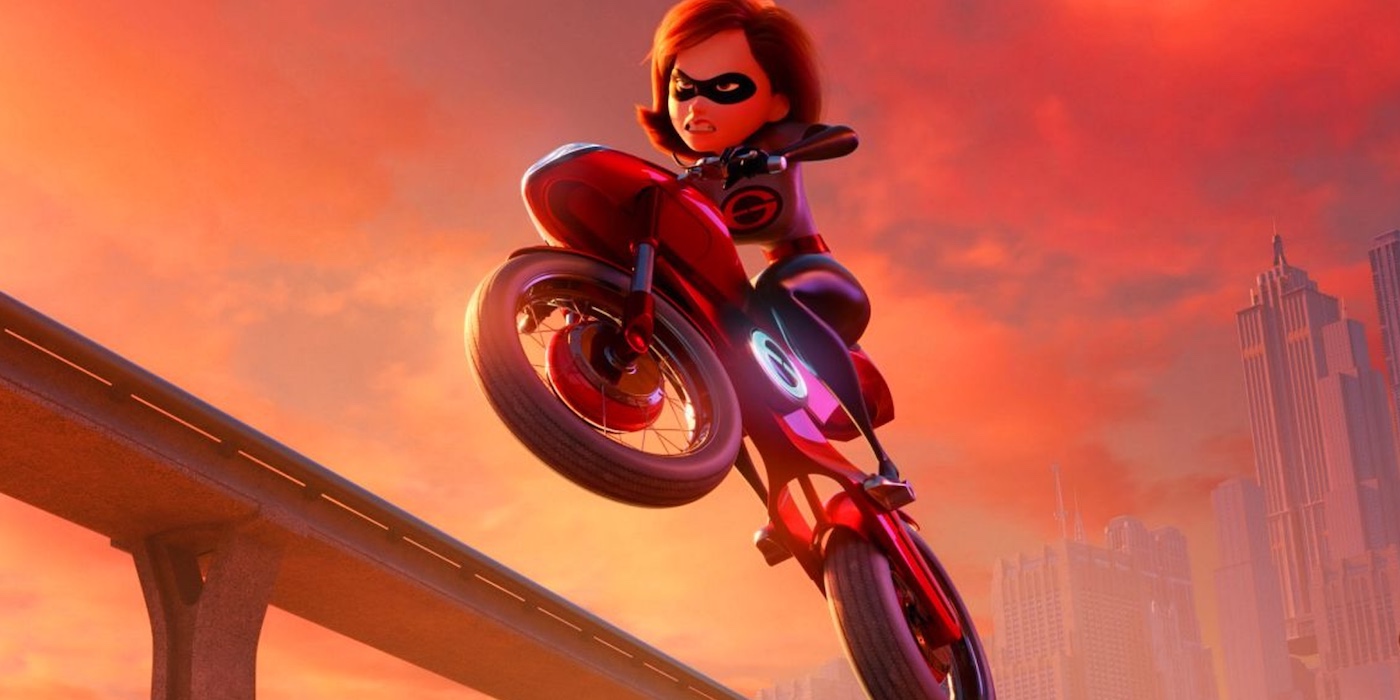 Holly Hunter and Sophia Bush in The Incredibles 2: Hunter’s Elastigirl was refreshing from the get-go, a stay-at-home mom torn between domestic duties and the sexy adrenaline rush of her crime-fighting alternate life. Incredibles 2 basically reverses the family situation of Disney’s first installment as Elastigirl goes into the super-powered work force while hubby Mr. Incredible stays home with the kids.

This means we get to see Elastigirl in action a whole lot more, which doesn’t disappoint. Plus, she’s got a new admirer/protégé in Bush’s Voyd, who possesses the power of dimensional teleportation, not to mention an awesome look that will inspire cosplayers for years to come. 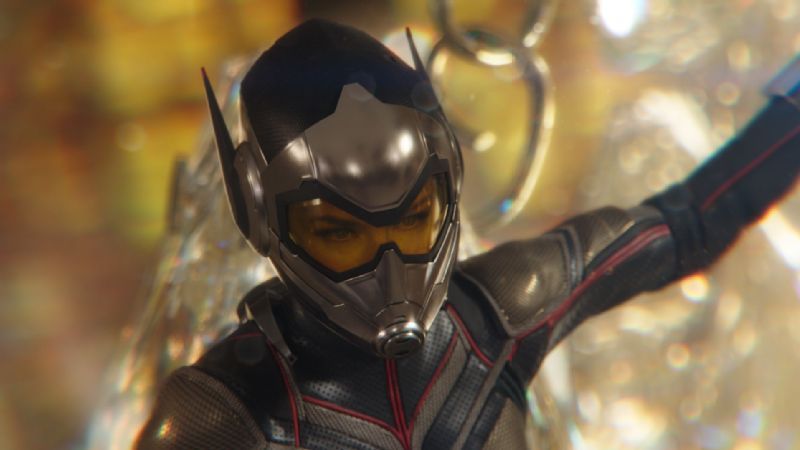 Evangeline Lilly and Hannah John-Kamen in Ant-Man and the Wasp: Many of us have been waiting to see Lilly’s Wasp, aka tech heiress Hope van Dyne, put on her costume and finally come into her own as a full-fledged superhero since she was denied this in the original Ant-Man movie. Thankfully, Lilly presides over a sizable chunk of the action in this sequel, showing off some creative variations on the basic shrinking, expanding, and flying abilities.

She’s well-matched by John-Kamen, making her debut as Ghost. The actor plays the baddie, who can “phase” through solid objects, with a desperate, creepy intensity, enhanced by her faceless white armored suit. My only complaint was I would have liked to see a lot more of her.

Rebecca Ferguson in Mission: Impossible – Fallout: I was instantly smitten with Ferguson when she appeared as mysterious British spy Ilsa Faust in Rogue Nation. Ilsa is voluptuous and lethal with a martial arts prowess rivaled only by her taste in shoes (and somehow this doesn’t come off as stereotypical). She also happens to be way more interesting than most of her male co-stars, including Tom Cruise’s Ethan Hunt.

So I was thrilled to see her return for Fallout, once again playing Hunt’s sometime rival and ally. It was a relief to see less of the male gaze directed at Ilsa this time around and more focus on her intelligence, bravery, and ingenuity. She’s also got a killer scene in which she saves Simon Pegg’s Benji. The look of furious determination on her face is a joy to behold.