Two of the biggest announcements at this summer’s San Diego Comic-Con came courtesy of the Star Wars universe, and best-selling YA author E.K. Johnston found herself smack in the middle of ecstatic fan reaction to both of them.

One was the revelation that Johnston, or Kate to her friends (and bloggers fortunate enough to make her acquaintance), would be the author of a new book, Star Wars: Queen’s Shadow. The novel, due in March, is set after The Phantom Menace and traces the evolution of Padme Amidala from queen to senator, a prospect that delighted prequel fans who’ve been wanting more of the character.

Meanwhile, Con attendees were processing the considerable feelings triggered by the announcement that the animated Clone Wars series would return to television after an unpopular cancellation in 2014.

While Kate wasn’t directly involved with that series, she does have a special relationship to one of its most beloved characters, Ahsoka Tano, having penned a best-selling Star Wars book about Anakin’s iconic Padawan.

The author’s history with Star Wars stretches back to childhood and memories of listening to an audio version of Return of the Jedi on vinyl. Now, she’s one of the few women who is writing, and thereby shaping, George Lucas’ galaxy far, far away, and doing so by examining the inner lives of iconic women in the franchise.

She’s also the mastermind of a versatile array of award-winning novels steeped in myth, fairy tales, and steampunk, including “The Story of Owen,” “A Thousand Nights,” “Exit, Pursued By a Bear,” and “That Inevitable Victorian Thing.”

I had the pleasure of chatting with Kate about her affinity for the women of Star Wars, her collection of Star Wars merch, her newfound passion for geek fashion, her other intriguing new novel to be released next year, and everyone’s new favorite Star Wars lady, Enfys Nest (OK, so I might have begged her to tackle that subject).

The announcement of your latest project, Star Wars: Queen’s Shadow, made quite a stir at San Diego Comic-Con. What was that experience like?

It was so exciting. Two of my dearest friends were in the audience, and we met because of Padmé, so getting to see their faces when the cover came up on the projector was just incredible. So many fans talked to me after that panel, even if it was just really quickly as we were passing in a hallway, and everyone was so enthusiastic. I couldn’t have asked for a better response.

The novel, about Padme Amidala, will hit shelves in March. You’ve said that Padme played a major role in reigniting your passion for Star Wars after you saw The Phantom Menace at age 14. Considering that, how did you feel when you were asked to write Queen’s Shadow?

I was in Iceland at the time, and so it was quite late at night. I just remember lying on my bed in the hostel with ALL OF THE FEELS and trying to fall asleep because I had to get up early in the morning to go riding.

Tell me about your first Star Wars experience and the evolution of your relationship with George Lucas’ franchise.

My first solid memory of Star Wars is from when I was about three years old. We had a vinyl of Return of the Jedi, a book on tape sort of thing, and I would listen to it with my brother. I remember Carrie Fisher’s voice and Vader’s breathing apparatus, and it was a straight shot out from there. Since then, I’ve grown with it, in a way. And it’s been marvelous.

I was excited to learn that Queen’s Shadow will focus on Padme’s handmaidens, especially her relationship with Sabe, who was played by Keira Knightley in Phantom Menace. That’s a genius idea. How did you arrive at this approach?

I can’t imagine doing it any other way. The handmaidens are such a key part of Padmé’s story (even though they aren’t really a key part of Anakin’s, which is why we see less of them as the saga unfolds), and I wanted to keep them in the centre of it for my book.

Another major announcement at Comic-Con was the return of The Clone Wars animated series and Ahsoka Tano. What was your reaction to this news?

I was doing a signing, so I couldn’t be at the panel or on Twitter. After that, I had to run to a panel of my own. So there I was, getting ready to talk about fairy tales, and I had five minutes. I watched the trailer and burst into tears as soon as the music started. Then, for the rest of the weekend, the excitement was just so palpable. It was amazing to experience in person, and I cannot wait to see the new episodes.

You’re obviously on intimate terms with Ahsoka, having written the Star Wars: Ahsoka novel. From your experience and the feedback you’ve received from fans, why is she such a significant character for women?

I think it goes beyond women. There’s a whole generation of Star Wars fans who grew up with her front and centre in the Star Wars galaxy, and those people kept the fandom active between the live-action movies. She kept the story moving, and that allowed for more inclusivity in the story we have now.

What’s the most important thing you learned about Ahsoka from writing her?

She’s more adaptable than she thinks.

You have a real affinity and enthusiasm for the women of the Star Wars universe. I read that Leia is your favorite. Why?

I think this goes back to hearing Carrie Fisher’s voice. At least, that’s where it started. But we see her, and she’s this tiny girl in a long white dress, and the first thing she does is shoot bad guys, stand up to Vader, talk back to Tarkin, withstand torture, and help with her own rescue, with the best hair in cinema. Obviously I fell in love.

I love so many of them! I love Hera’s determination and Iden’s conviction and Beru’s kindness and Paige’s bravery and and and …

But let’s talk about Enfys Nest.

Her reveal is so perfectly executed. She’s built up as this … usual bad guy. A new Boba Fett-style character to counter Evil Haymitch and sell Lego (the Lego is so coooooool). Except she is so much more. And to start with: she’s not a bad guy! She’s the hero. She flips Han Solo, this young girl with her soul on fire and her heart committed to a better galaxy. I love that we got to be so surprised when she took her helmet off. It was glorious. But if Erin Kellyman wants to get involved now that she can, I hope they throw her a serious welcome party at Celebration.

You have quite a collection of female-centric Star Wars merch. When did you begin collecting?

I have a few action figures from The Phantom Menace, but I truly began collecting in 2015 because 1) I had a disposable income, and 2) There were things I wanted to collect.

What are some of the prized items in your collection?

Let’s talk a little about your geek origin story. I read that you discovered fandom in college. How did that happen?

I actually discovered it slightly before that, in high school. I read fanfic for Star Trek: Voyager and X-Men: Evolution (and then erased the browser history on the family computer; those were adventurous times!). But at uni, I had uncontrolled access to the internet, and that was when I started accounts on message boards, ff.net, and LiveJournal. My first major fandom was actually CSI, though I have always dabbled in the Tolkien fandom.

You’re a huge Tolkien fan. How did you discover him and why is his work important to you?

When I was four or so, my father read me (and my younger brother) the entirety of The Hobbit. I read LotR when I was eight (because someone told me they were for grownups). But it’s the movies that really brought me into fandom (probably because movie fandom for Tolkien is way less dusty than book fandom … not the least because movie fandom includes the books, but book fandom doesn’t always include the movies). I learned to write with these books. And I learned to dream.

You also seem to be a fan of geek fashion. Are you addicted to Her Universe like the rest of us?

So much! I used to be absolutely hopeless at clothes (a combination of not being able to afford much new stuff, a lack of available sizes that fit me, and a general disinterest in how I looked), but in the last few years I have learned so much about styles and whatnot, and now I find it actually fun! And Her Universe is really trying to make geek clothes accessible, which I literally cannot appreciate enough.

Along with Queen’s Shadow, we’ll also have the pleasure of reading another new book from you next year. The Afterward is due in February. How would you describe this novel in relation to your other work?

I never really imagined being a writer, but I always thought that if I did write anything, it would be an Eddings-style quest fantasy. It turns out that my attention span isn’t quiiiiiiite that long, so I am writing a story that takes place AFTER an Eddings-style quest fantasy instead. It’s epic, it’s queer, it’s full of women, and I had so much fun writing it. I can’t wait to share it with everyone. 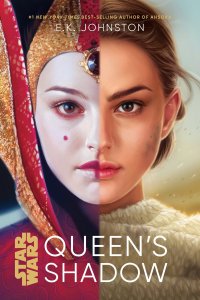