It’s no surprise that Kay-Kay Clapp is a fan of Star Wars resistance rebels Rey and Rose Tico. She’s a bit of a rebel herself.

After burning out on tech company marketing jobs, she found the perfect fit for her skills and interests at iFixit, a free online repair manual with the goal of teaching “everyone to fix everything” in an effort to reduce e-waste.

Kay-Kay oversees iFixit’s content creation, including blog posts, videos, live streams, newsletters, and campaigns. Though her resourceful mother taught her a thing or two about DIY repairs, Kay-Kay initially had no experience with electronics, but can now fix iPhones and perform device teardowns.

She also injects a healthy dose of her geek personality into her job, creating Star Wars and Harry Potter-themed blog posts and convincing her boss to let her purchase and teardown a toy Landspeeder while wearing a Rey costume for an iFixit video.

When she’s not working for the cause of the #righttorepair movement, she’s indulging her passion for cosplay, dressing up as characters from Harry Potter, Marvel, Disney, Game of Thrones, and The Fantastic Mr. Fox. She also partakes in #coversincosplay, performing song covers while in cosplay, a phenomenon you can witness on her Instagram.

Read on to learn more about Kay-Kay’s involvement with #righttorepair, how she combines her love of cosplay and musical theater, and her enthusiasm for The Office, Rose Tico, and the new Wonder Woman movie poster. 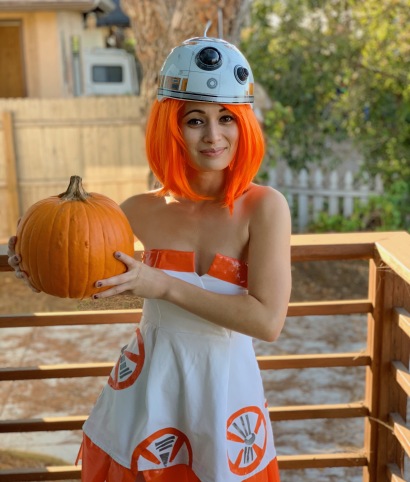 You’re a geek who cosplays and occasionally sings song covers while in cosplay. You’re also the global communications director for ifixit.org, a free online repair guide. What does your job entail?

It changes a little every day, but I mostly oversee content creation: blog posts, videos, live-streams, newsletters, and campaigns. I spend a lot of time talking to people who write for the internet about repair. I’ve told The New York Times what to do when you spill on your laptop. I debunked a myth with Refinery 29 about using cat litter to dry out a water-damaged iPhone. And one of my favorite features was when Inc. magazine came to visit and snapped a picture of me working at my under-desk.

How did you come to work with iFixit?

Before iFixit, I worked in marketing for a few different tech companies. I got burned out on convincing consumers to buy software that they probably didn’t need, so I landed on iFixit the traditional job-searcher way — à la Craigslist.

Could you tell me more about the organization’s mission and how its work combats electronic waste?

iFixit’s mission is to teach everyone how to fix everything. The easier it is to fix something, the more people will do it. The best shot we have at reducing e-waste is to increase the lifespan of our stuff. When stuff is repaired, it holds on to all the energy and materials it used up during manufacturing. Nothing is wasted. Nothing is lost.

Your recently wrote a beautiful post for ifixit.com, talking about the role your Mom played in teaching you to repair things. Tell me more about how she influenced you.

My mother is a force of nature — she’s got the determination of Daenerys Stormborn and the resourcefulness of Molly Weasley. Those two traits have really stuck with me. Oh, and cooking — I started cooking alongside her as soon as I was able to grip a wooden spoon. 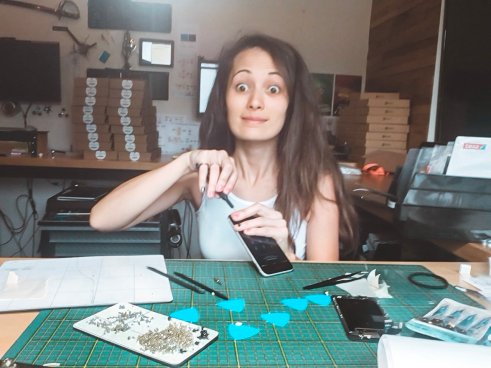 Sadly, I think there’s this perception that women don’t know how to fix things and aren’t capable of learning that. Have you encountered this attitude?

Definitely, but as T-Swift has taught us, haters gonna hate. Everyone is capable of learning how to fix their e-stuff. I’m proof! I didn’t know a thing about electronics repair when I started working at iFixit, so I make a point to shine a spotlight on all kinds of first-time fixers.

Are there many women working in the repair tech field?

Repair is definitely a male-dominated industry, but we’re seeing more and more women join the ranks every year. I fangirl pretty hard over Jessa Jones — she was a stay-at-home mom who taught herself how to microsolder. Now, she’s one of the most respected techs in the industry and the go-to resource for board-repair.

I read that it took you awhile to feel comfortable letting your “geek flag fly.” Were you a geeky kid?

I definitely was (and still am) a geeky kid. When I was 5, I used to tote around a big back-pack brimming with books. I remember getting in trouble during Karate lessons for sitting in the lobby and reading instead of sparring. On my 11th birthday, I had myself a good, long cry when I didn’t receive my letter to Hogwarts.

What enabled you to really embrace and express your inner geek?

I think my two big brothers get first-credit here. They introduced me to the Marvel Universe, Star Wars, Lord of the Rings, comics and video games. They called me Hermione —which I adored —and stopped kids from picking on me at school (Slytherin-style).

Do your geekier interests intersect at all with your iFixit career?

Definitely. I weave Star Wars into a lot of my blog posts. A couple years ago, I put together a series of posts about different screwdrivers called, “Fantastic Bits and Where to Find Them.” And for my staff photo — which is printed on my business card — I stood with Bellatrix Lestrange’s number-sign from Azkaban prison.

You and a co-worker once convinced your boss to let you tear down a toy Landspeeder and make a video in Star Wars costumes. The video is awesome, by the way. Tell me more about how that happened.

To be honest, it took about 2 seconds to convince our CEO to buy us a Landspeeder — he’s a huge Star Wars junkie, too. Once we decided on making a teardown video, everyone assumed I’d do the video in costume.

I guess it’s no wonder you’re into Star Wars. As a member of the #righttorepair movement, which involves challenging government legislation and big corporations, you’re a rebel yourself. What do you love about George Lucas’ galaxy far, far away?

I love that Star Wars threads together so many generations of fans — parents, grandparents, teachers, coworkers, students … it’s a classic whose themes have not only stood the test of time, but continue to resonate with new audiences. 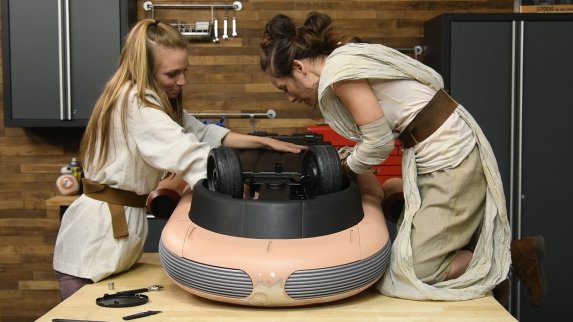 Kay-Kay and a colleague tear down a toy Landspeeder for an iFixit video.

What’s your Star Wars origin story? When did you first discover the franchise?

You know the movies that were always playing in the background when you were a kid? Like A Christmas Story does during the holidays? That’s what Star Wars was for me. My family watched the movies a lot. Sometimes, when I hear the soundtrack, it’s like a little piece of my soul is right back in my parent’s living room — sitting crossed-legged and too close to the TV.

You’ve cosplayed as Rey, Rose Tico, BB-8, and an Ewok. Rey and Rose have been fairly controversial figures in the Star Wars fandom. What are your thoughts about that?

I remember the day Kelly Marie Tran left Instagram — it felt like a punch to the gut. I rage tweeted about it. As a first generation Asian-American, it was huge to see her in a major role in the Star Wars franchise. When she struck back with her op-ed in the NYT, I identified with a lot of the things she said. 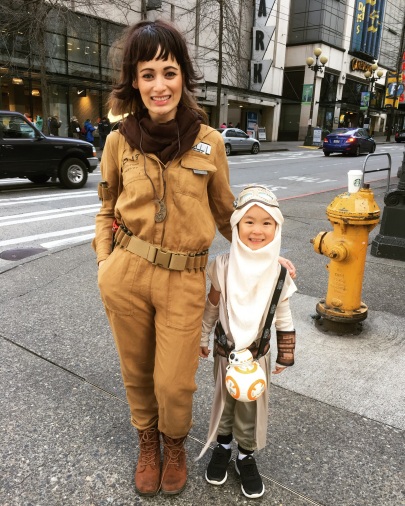 It’s a huge year for Star Wars with new developments, announcements, and releases on an almost daily basis. What are some of the things you’re most excited about in the fandom right now?

How did you first get into cosplay?

I grew up doing a lot of musical theater — I think putting on a costume and pretending to be someone else is in my blood. After I left the stage, I just never stopped putting on costumes.

You’ve cosplayed characters from Harry Potter (Newt Scamander and Bellatrix LeStrange), Marvel (Valkyrie), Disney (Vanellope von Schweetz), and Game of Thrones (Daenerys). Where do you get your ideas from? Tell me about the process of putting a costume together.

Unlike most cosplayers, I’m actually a horrible sewer. I usually start by looking for base pieces on Poshmark or thrift stores. From there, I try to make the cosplay more screen-accurate by adding props and embellishments. (I use a lot of fabric glue, lol.)

I love that some of your cosplays are more casual and appear to be simple, but they’re really cute and fun (like your Felicity Fox from The Fantastic Mr. Fox). What do you like about this “casual” approach to cosplay?

Being in cosplay sparks a lot of joy for me, so casual cosplays are like the next best thing. They’re like a subtle nod to my nerd-side that I can wear comfortably in everyday life. 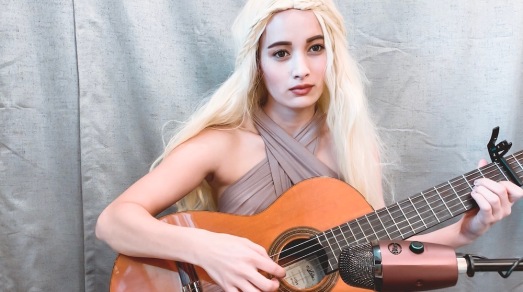 You also do this thing called #coversincosplay. I didn’t even know about this until recently. How did you discover it? What do you enjoy about it?

I love my job at iFixit, but sometimes I really miss performing. #Coversincosplay are a thing I just started doing as a fun way for me to flex some of that musical muscle I left behind.

You’re a Slytherin. What are some of your most Slytherin qualities?

My ambition often gets the best of me — I’m always over-committed and taking on too much. I can (maybe) be cunning when I need to be. Also, competitive.

What are some of your other favorite fandoms?

I’m a huge Office fan. It’s my comfort show, and it’s carried me through some dark times. At Emerald City Comic Con last year, I cosplayed as Recyclops when I met Rainn Wilson.

If readers are interested in learning more about #righttorepair, how would they go about that?

We cover Right to Repair extensively on the iFixit blog. iFixit also co-founded Repair.org to give consumers a voice for the entire repair industry — there’s a lot of good info on how to get involved on their website, too.

Can you give us a hint as to what some of your upcoming cosplays might be?

When I saw the new Wonder Woman poster the other day, it absolutely took my breath away. 😉

What’s left to check off on your geek bucket list?

The list is long, so here’s my top three: Galaxy’s Edge, Hobbiton in New Zealand, and the Warner Brothers Making of Harry Potter studio tour in London.