Four years ago, in a galaxy not so far away … two longtime Star Wars fans — Lavender of nomansland.blog, and Shawna of earthtoshawna.com — decided to search their feelings and work out their issues after seeing The Force Awakens. It was so much fun, we did it again with The Last Jedi and now complete the trilogy with our thoughts on “The Rise of Skywalker.” Here’s the conversation …

SPOILER ALERT: If you’re planning to see Star Wars: The Rise of Skywalker, you honestly should have done that by now. If you haven’t though, you’re going to want to skip this post and go look at Baby Yoda memes instead.

Lavender: Well, the saga of the Skywalkers has come to an end, the culmination an era for the legendary franchise that began in 1977 with George Lucas’ A New Hope. The final chapter of the New Trilogy, Star Wars: The Rise of Skywalker has divided critics and fans. (Fans love it. Critics not so much.) 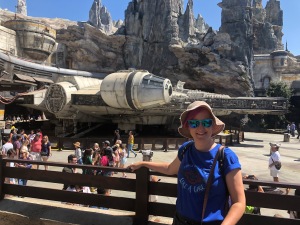 Personally, I don’t hate The Rise of Skywalker and the film contains several things I love. My soul wasn’t crushed by it, but I do find myself disappointed. This is mainly because a lot of it doesn’t make much sense to me and, when I say that, I don’t mean because of plot holes (although there are many of those).

It’s that many of the choices by director J.J. Abrams and co-writer Chris Terrio don’t make sense to me on a narrative level. They feel dramatically out of sync with the many daring thematic and narrative choices made by The Last Jedi director Rian Johnson. And they don’t make sense for the characters we’ve come to care about or succeed in providing a satisfying ending for them.

What was your reaction to The Rise of Skywalker?

Shawna: I actually did find it satisfying. I agree with you about plot holes, for sure, and I definitely would not describe the film as flawless, but overall I was happy with the way they wrapped up this trilogy. 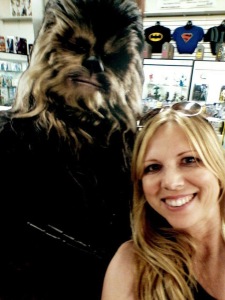 Like “The Last Jedi,” it took a while to hit its stride. The emperor being back was an eye roll for me. Do the writers have a recycled dialogue and plot spinner they use when they’re not sure how to proceed? Or was I suffering from Star Wars fatigue?

That’s what I was wondering during the first half of the movie. But little by little, it worked its magic on me, and by the end, I was bawling.

Or maybe it’s less magic and more emotional manipulation. There were at least five deaths, and three of those didn’t stick. Chewie is DEAD? Oh no wait, he’s alive. Kylo Ren is dead? Oh, now he’s not. Rey is dead? Etc. Was it just me or did that get old?

Lavender: I, too, found Emperor Palpatine’s return to be pretty silly. I wasn’t opposed to him coming back, but there is so much about his presence in The Rise of Skywalker that is just baffling. His motives for luring Rey to his side are sketchy and constantly shifting.

How did he come back from the dead? And he’s just been sitting for years on all these Star Destroyers that each have the power of a Death Star? And apparently he cloned Snoke in a tank, but why didn’t he just return and reveal himself earlier?

And who are all those hooded hordes of Sith henchmen chanting in this dark, Vader’s Castle-like stadium when Rey finally faces him? I’m not much of a stickler for explanation in Star Wars, but there was just too much sloppy scripting here for my taste.

My biggest issue with Palpatine’s resurrection is the revelation that he is Rey’s grandfather. Maybe I’m naive, but I really thought Abrams wouldn’t go there. It did feel like a huge capitulation to a certain type of toxic fan who complains about Rey being a “Mary Sue.”

I fell in love with the concept introduced in The Last Jedi of “Rey the Nobody” and the democratic ideal that the Force could pluck one person, any person, from obscurity and imbue them with power to right the balance.

Abrams’ decision to “explain” Rey’s natural affinity for the Force and her bond with Kylo Ren by connecting her by blood to a major character from the original trilogy erased all that. I was deeply disappointed by this, and from a feminist perspective it’s problematic.

I didn’t mind the way The Force Awakens played like a love letter to A New Hope with tons of references to the OT and familiar, old characters returning, but I found the way Rian Johnson subverted those tropes and familiar elements so thrilling and refreshing.

The Rise of Skywalker, on the other hand, seems slavishly devoted to the OT and to fans of the OT in a way that feels regressive and stale. Finn, Poe, and Rey — and, to some extent, Kylo — could have really come into their own in this chapter but instead their destinies are shaped by Luke, Leia, and Han.

If Star Wars is going to survive, the creators and the fans need to let go of the Skywalkers, and hopefully that’s what will happen now. The Disney Plus series The Mandalorian has done exactly this to marvelous effect. That’s the future of Star Wars, in my opinion.

We’ve talked about some of the flaws of The Rise of Skywalker. What did you love about it? 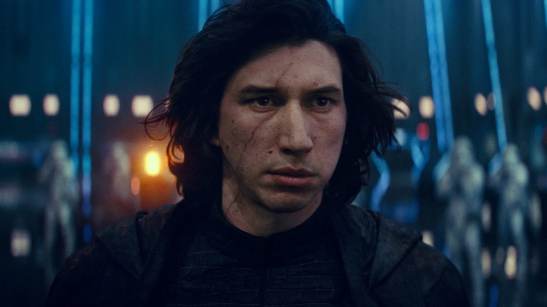 Shawna: I also loved that idea from the last film — that anyone could use the Force. It didn’t have to be someone with the right genes or whatever. So that was a disappointment to me as well. Why Palpatine, why now, why Snoke? And yes — what was that weird audience in the arena all about?

I was willing to overlook the ridiculousness of all that because of all the things this film did right.  For example, I have always liked the chemistry/tension between Rey and Ben/Kylo Ren, and they finally find their way to each other, in this film. I think their story is the best one in this film.

Adam Driver is such an amazing actor, and I really like the character of Kylo Ren/Ben. I think we got to see Han in him, in this movie. I wanted to punch him and also give him a hug. He really breaks your heart in this film. I knew he couldn’t survive because how would that work? They couldn’t live happily ever after, after everything he’s done.

I also loved seeing Leia, Han, and Luke again. It was bittersweet, knowing they’re probably not going to appear as these characters again. And, of course, knowing Carrie Fisher was already gone when they filmed this, her goodbye was that much harder.

I’ve grown to love the new trio too. I like the friendships between Finn, Rey, and Poe. I laughed and I cried. It was an emotional roller coaster for me.

I think the writers played it safe with these movies, which was good in some ways and not so great in others. I think, like you said, whoever takes Star Wars forward needs to let go of that — throw out the Star Wars spinner and start from scratch. 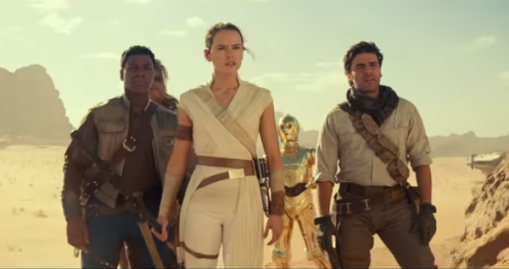 Lavender: I agree with you about the chemistry between Daisy Ridley as Rey and Adam Driver as Kylo Ren/Ben Solo. Driver’s performance, in particular, is the highlight of the film. In a very short amount of time and with not much support from the script, he absolutely convinces us of Ben’s redemption. The scene with Harrison Ford’s Han is heartbreaking and his final scenes with Rey are powerful. I know a lot of people are devastated the so-called “Bendemption” was so short-lived and that he went out in the way he did.

I’ve loved the electricity between Rey and Ben since The Last Jedi and find them to be compelling as star-crossed soulmates. I never saw them ending up together because the way Kylo kind of Force “stalks” Rey and tries to manipulate her into joining the Dark Side is disturbing to me. However, I found the abruptness of Ben’s fate unsatisfying. I would have liked to see a more complicated arc that depicted his transformation and redemption beyond that showdown with Palpatine.

I also was really struck by the few, fleeting moments with Carrie Fisher’s Leia. This movie retroactively fulfilled one of my childhood fantasies. After I saw Return of the Jedi as a kid, I was absolutely convinced Leia would go on to train in the Force and become a full-fledged Jedi. Seeing that flashback with Luke, watching her train Rey (even if Rey didn’t complete the training, so frustrating!), hearing Rey call her “Master,” and then seeing HER lightsaber was so fulfilling. I’ll never forget it.

Other things I loved: The trio of Rey, Finn, and Poe back together again (although I would have liked a really meaty subplot of self-discovery for Finn). Adorable new droid D-O and, of course, Babu Frik. Haaaaaayyyyyyy!

I’m a big fan of new Resistance allies Jannah and Zorii Bliss, but wish Star Wars didn’t have such a bad habit of introducing amazing new characters and then not giving them much to do (or killing them off prematurely). Also, the outcry over the lack of screen time for Kelly Marie Tran’s Rose is absolutely warranted. What was J.J. thinking? 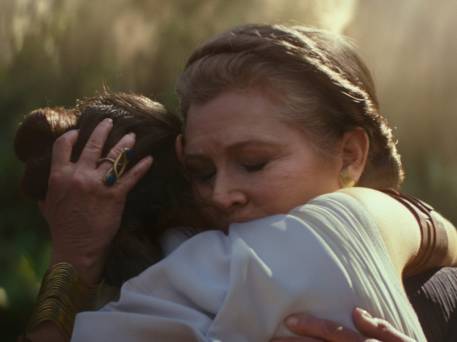 Shawna: The very limited screen time of Kelly Marie Tran in this film was one of my biggest issues too. She’s a great actress. (I love her in the Facebook Watch series “Sorry For Your Loss.”) I guess the cast is too large for us all to get more of our faves. But they could have cut out some of that scavenger hunt and the recycled “code breaker” story, to give us more Rose!

The Leia flashback was a great surprise — I wish it had been longer. I also love that Leia finally gave Chewie a medal. I guess that’s what they mean by “fan service,” but I’m here for it!

Lavender: The term “fan service” has been thrown around a lot in relation to The Rise of Skywalker. I read a Tweet in which fan service was described as basically something in a fandom that other people like, but you don’t like. LOL.

Anyway, my take on the movie is that it’s trying really hard to deliver fan service to everyone but it’s mostly just making a lot of people unhappy. Reylos get their fairy tale kiss, but then Ben dies. Toxic fanboys still have to put up with Rose, but she’s barely in the film, so her supporters feel betrayed.

Finn is — probably? — Force sensitive, which is cool, but we only get hints of it. Palpatine returns but in the lamest and most confusing way possible. Rey’s parentage is revealed but it creates pesky narrative problems, like the fact that her parents “saved” her by selling her into slavery and a lonely life on Jakku.

I could go on, but I won’t. Instead, I’ll watch The Mandalorian again and dream of the future of Star Wars. It’s still bright!