Geeks Who Eat take a bite out of pop culture

Looking to spice up dinner tonight?

How about some Cemetery Soup, inspired by the movie Scary Stories to Tell in the Dark? Or maybe some Hulk Tacos or Duke Caboom’s Canadian Style Poutine?

Is cocktail hour getting a little boring, or are you searching for that perfect drink recipe for a party?

Whether you want to inject some geeky creativity into mealtime, snack time, or a party, you’ll find the pop cultural inspiration you’re looking for from Geeks Who Eat (2geekswhoeat.com), a website founded by Sarah Stubbs and her husband, Matthew.

Stubbs’ love of food began in the kitchen with her Mom and intensified after a trip up the California coast that included stops at legendary eateries Chez Panisse and The French Laundry. She began blogging for Disney-themed website DAPS Magic before deciding to create her own blog with help from Matthew.

Geeks Who Eat features a broad range of menu items, including main dishes, sides, desserts, and drinks, many of them tying into recent movie releases, such as Scary Stories to Tell in the Dark, The Kitchen, The Lion King, and Avengers: Endgame.

Sarah cooks up lots of other food-related content as well, including interviews, party guides, food news, and reviews. She and Matthew partner with film studios and PR companies to whip up custom, themed recipes and specialty drinks. They were once asked by Disney to dream up three dishes in honor of the release of Rogue One: A Star Wars Story!

The Stubb’s kitchen concoctions often reflect Sarah’s love of Disney and horror (The Blair Witch Project was and is one of her major influences), whether the latest dish is Goat Cheese Seashell Bites inspired by The Little Mermaid or the Something Sinister cocktail in honor of Jordan Peele’s Us.

Read on to learn more about Sarah and bring your appetite! 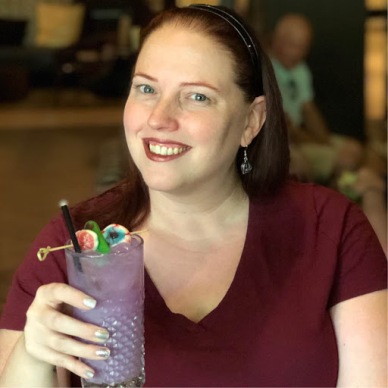 You’re a blogger who runs the website Geeks Who Eat, which brings together food and pop culture with recipes based on movies, TV series, video games, and other fandoms. You produce the blog with your husband, Matthew, who handles the tech side of things. How did you become a foodie?

I’ve always loved food. My love of food started at an early age when I would cook with my mom. Around the age of 13, my sister Jessica took me on a trip up the coast of California that cemented my love of food. We dined at restaurants like Chez Panisse and The French Laundry. From then on food was a passion.

Tell me a little about your earliest cooking endeavors and influences.

My favorite memories of cooking involve helping my mom get ready for the holidays. I love feeding friends and family and the holidays are a big part of that. As for cooking, my earliest endeavors involved mainly breakfast foods like scrambled eggs and popovers.

What about your geek origin story? When did you first embrace fandoms and pop culture?

Oh man. I’ve basically been a “geek” since childhood. I started out with Voltron, She-Ra, and ThunderCats when I was around 3. I’ve always been a huge Disney fan. However, I’d say my first real “fandom” would have to be The Blair Witch Project. It was unlike anything I’d ever seen at the time and I was obsessed (still am, in fact)!

What’s your writing background? How did you become interested in blogging?

I’ve loved writing for a long time. That love and a family of history majors led me to get a bachelor of arts degree in history. When you major in history, you do a lot of writing. Blogging just kind of fell into my lap when I was asked to contribute to DAPs Magic.

You began your blogging career with (Disney-themed website) DAPS Magic. Is it true you decided to branch out on your own because that blog was a little too family friendly for your interests?

It wasn’t exactly that it was too family friendly. It was more that I wanted to write about food and with that comes cocktails, beer, and wine. DAPs Magic has more of a Disney readership, which wants less discussion of those things, so I decided to create my own blog.

You’ve talked about the idea that foodie culture and geek culture have a lot in common. When did you realize this? Why do you think these two subcultures are so similar?

I think in some ways I’ve always known. The two are similar because both are about passion for something.

At what point did you know/decide that Geeks Who Eat would be more than just a hobby?

It became a full-time job for me after I realized that after almost 10 years in the same company I was miserable. I wasn’t getting anywhere and I wanted more. Matthew encouraged me to go for it and so we did!

Sarah and Matthew Stubbs are the Geeks Who Eat.

You and Matthew work as a team. How would you describe your collaborative dynamic?

It’s pretty amazing. I’m more of the creative side and he is more the technical side. We have moments where we fight about the execution of something but typically it comes together.

I feel like there are a lot of geeky dessert makers, but Geeks Who Eat is unique because you feature the whole range of menu items, including main dishes, sides, desserts, and drinks. Does that make your job tougher or easier?

For us, it is easier. Neither of us really love baking or are very good at decorating so it was a natural fit.

Where do you find inspiration for your recipes? I understand you do a lot of research and often reference history or geography in the creation of a dish or drink.

That is pretty much where we start. We look for thematic elements from the subject and go from there. We then try to find ingredients that fit together and a recipe is born!

What about the process of actually putting together and testing the recipes? What kind of work goes into that?

Usually, we try to find a similar item and base our recipe around the cook times, etc. For example, if a certain type of thing has to cook for X amount of time we know that our recipe will need to have a similar time. Sometimes if the item is regional, we will find other recipes for that and then modify it to be unique to our site.

Do you ever attempt a recipe and get a major fail instead?

We’ve had lots of those. Sometimes it’s easy to get overzealous. We have yet to successfully make candy.

Many of the recipes featured on Geeks Who Eat are tied to specific movie releases, like your recent tie-ins to Scary Stories to Tell in the Dark, The Kitchen, The Lion King, and Avengers: Endgame. When did you begin to partner with film studios and how did that come about?

That happened a few years ago when we asked the local PR company handling Blair Witch if we could create a recipe for them. After many emails and proving our skills, other agencies reached out to partner with us.

How do those partnerships work?

Basically, an agency will pitch us a movie and we’ll come back with a recipe idea. If they like it, they have us create it for them. Sometimes they will be used for press drops, email blasts, or giveaways.

Geeks Who Eat features a lot of other food-related content, including interviews, party guides, food news, and reviews. Tell me about the behind-the-scenes work that goes into putting together a post.

Sometimes a recipe just won’t work for a specific property so we get creative and create a different form of content. The process to create these types of things are still the same as when we create recipes — looking for themes, etc.

You and Matthew have developed a lot of unique pop culture-themed cocktails. What’s the secret to whipping up a really great geeky cocktail?

I think the secret is understanding the science behind cocktails and the basics of how to create a balanced flavor profile. They also require a lot of trial and error.

Judging by many of the recipes you’ve created, I’m guessing you’re a pretty big horror fan. What do you enjoy about that genre?

It’s something that is hard to put my finger on. Honestly, I’ve watched horror movies since I was young. I started with Jaws when I was 6 and from there went on to the classic Universal Monster movies. All of the mid to late ‘90s horror, like Scream and I Know What You Did Last Summer, played into my love for the genre.

The Blair Witch Project was also a huge thing for me in high school. Believe it or not, I was in my early 20s before I ever saw the major slasher films. Not only that, but a shared love of found footage horror movies is what saved my first date with Matthew.

What are some of your go-to horror movies and recent favorites?

In terms of go-to, some of my favorites are House of 1000 Corpses, Grave Encounters, The Texas Chain Saw Massacre, Jason Goes to Hell: The Final Friday, and so many more! Recently, I really enjoyed Midsommar, The Man Who Killed Hitler and Then The Bigfoot (though this is less horror and more genre), and Annabelle Comes Home. 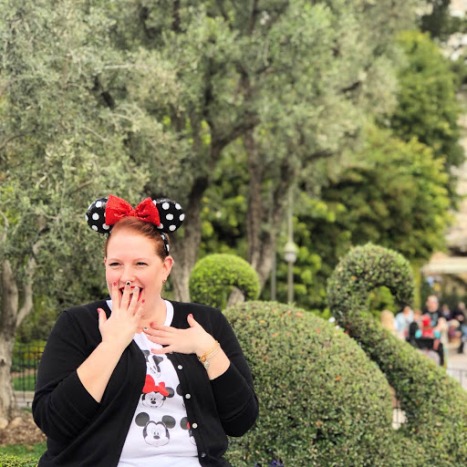 HUGE! I’ve been going to Disneyland since I was 4. I’ve had an annual pass off and on for about the past decade. We recently just got them again and I’ve been enjoying more time in the parks.

Disney asked you to create three dishes for the release of Rogue One: A Star Wars Story. As a Star Wars fan, I think that’s amazing. What was that experience like?

Stressful! It was the first project we had done for Disney. Initially we had thought of one recipe and then they came back asking for 3. We definitely were in over our heads at that point but we made it work and they all turned out great.

What are some of your other favorite fandoms?

Some of my other fandoms include Harry Potter, Comics (both Marvel and DC — I have a fairly large comic collection), Stranger Things, and I’m sure there are more I’m not thinking of.

Do you tend to get a lot of reader feedback? Do people send you photos after they’ve tried your recipes?

We do get some! We’d love to get more! Seeing people’s photos of our recipes makes us extremely happy! We also love to hear when people enjoy our recipes.

What are some of your favorite foods to eat when you’re not blogging?

We eat a lot of Japanese food. Aside from sushi (which I love), I am huge fan of izakaya style cuisine (Japanese bar food).

You live in Scottsdale, Arizona. What’s the food scene like there? Where should we eat if we decide to visit?

I really would love to dine around the world. For me, a trip to Japan would be amazing in terms of food.